Remember the name Roberto Jimenez and don't you dare forget it! This young star is truly making a name for himself in the Jiu-Jitsu world. Within just these past few months, he's dominated almost all of the tournaments he entered as a blue belt juvenile. At this year's Pans, he subbed all of his opponents in both his division and in the open, winning double gold. For worlds, he won in his division via all submissions and got silver for the open.  At this year's IBJJF Vegas Open, he won his division and the open for both gi and no-gi.  It was Roberto's first time doing no-gi at an IBJJF tournament as well.

From all these accomplishments, it was no surprise that the creators of Royal chose him to be one of the fighters in their tournament on June 11, 2016. Royal was a 16-men bracket, invite-only tournament. They had one division for blue/purple belts and another one for brown belts. He won his division and was asked to compete with Gutenberg Perreira (the winner of the brown belt division) for his last fight.

Of course, Roberto wasn't going to refuse one more fight. Although he didn't win that match, he was proud of his performance for that tournament and that he came out with another huge experience under his belt. Roberto says that being a part of Lucas Lepris' camp for both Pans and Worlds greatly impacted him through all his wins and of course his Father Raul Jimenez (black belt and multi bjj champion) and his mother Gaby Muller (brown belt and avid competitor) for all their love, gudance and support!

Roberto also shared his rituals with us saying, "I listen to a lot of inspirational speeches before and after training... I like to pray also right when I enter the tournament and before and after every match." With a good head on his shoulders and an unquestionable talent, Roberto prepares for No-Gi Pans and Worlds and any other Opens that he believes would give him good matches. He's aiming to win more double golds and to always finish his opponents with submissions. We're so stoked to see this young man grow and eager to find out what else he'll dominate in his near future!

Check out Roberto Jimenez and Raul Jimenez at Gacho/Alliance BJJ in Spring Texas for some solid comp training.

Follow Roberto on Instgram @roberto_jimenez for solid techniques and tips.  This kid is the future! 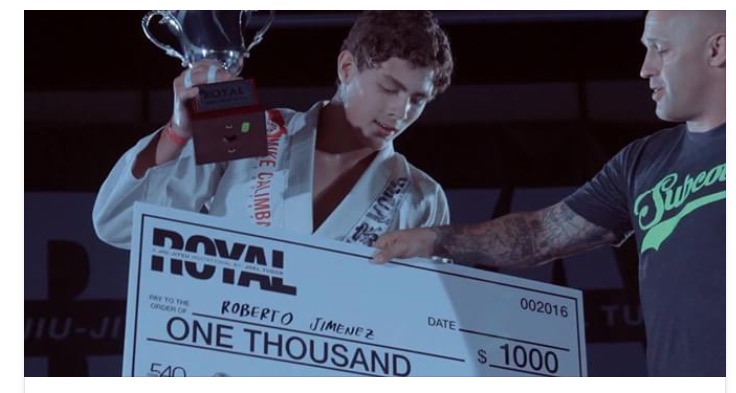